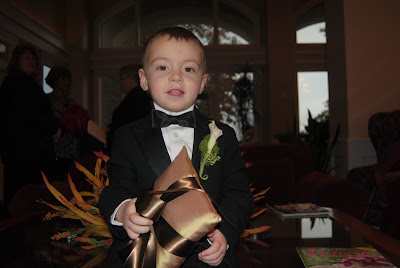 One of my daughter's closest friends got married this weekend and my family was part of the wedding.  Grayson was the ring bearer and I must say he did a fine job and looked so handsome in his little tuxedo. 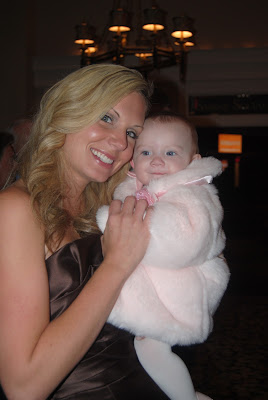 My daughter was a bridesmaid and Sloaney was part of the audience.  It was rainy and cool and I was so happy she had her pink "fur". 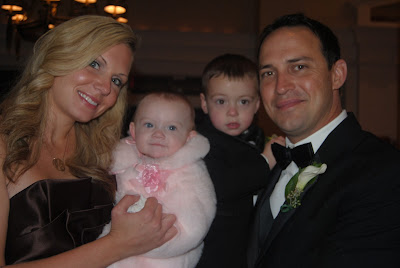 My son-in-law was also part of the wedding so it was a family affair.  The bride was stunning and her colors were gorgeous.....browns, copper & cream.  It was a fun way to end a holiday weekend. 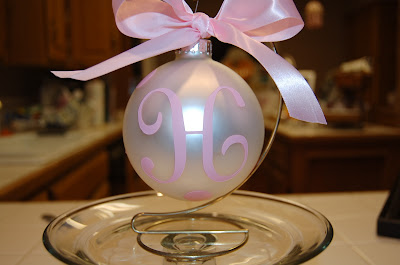 When my son needs gifts I stop what I'm working on and sew for him.  It just so happened that he needed several gifts this week.  One is a baby gift for little Harper who will be born soon.  I used my Cricut and cut her initial using a font called "Gesselle".  It has a French look to it and I really like it for girls.  I downloaded it from dafont.com  Lots of free fonts there. 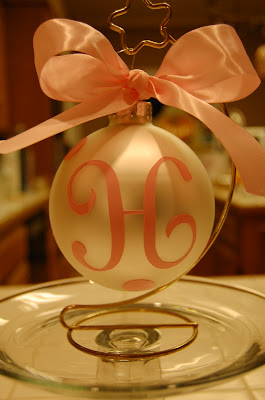 The ornament turned out so soft, girly and sweet. 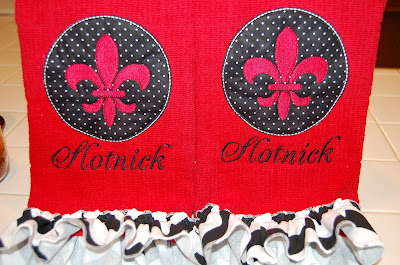 My son has a co-worker moving soon and they are making her a basket of goodies.  He asked for something to represent Louisiana so I did a fleur de lis on kitchen towels.  The ruffle is a chevron patterned fabric that we used for Grayson's birthday shirt. 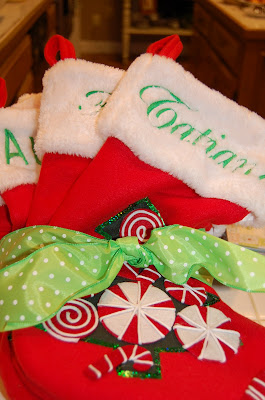 His office is also adopting a family for Christmas.  There are 6 children in the family.  He wanted them to have personalized stockings.  I searched several stores looking for stockings that were child-like and reasonably priced.  They were no where to be found so we were about to decide on other gifts for the children.  I walked into Lowe's not even thinking about the stockings and there they were.  Cute and priced just right! 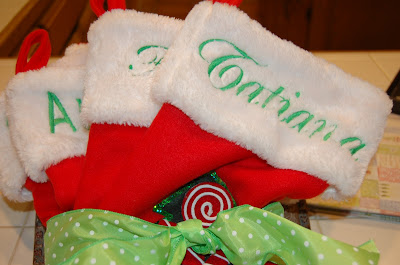 However, I just about gave up after monogramming the first one.  Monogramming stockings is difficult because of the logistics and placement and having to use a water soluble stabilizer on top.  I wouldn't have done them for just anyone but for my son to give to these children I would. 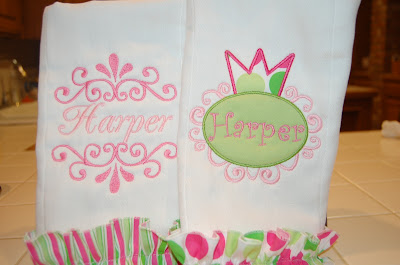 And more of the baby gift for Baby Harper.  I wanted to keep everything pink and green.  I love her name :) 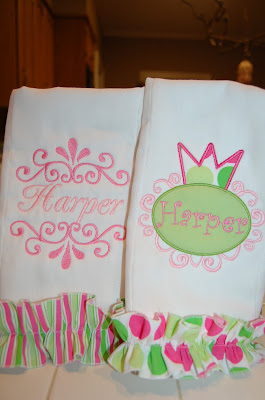 Sweet Baby Harper
Well it's back to work tomorrow.  I hope you have a great week!  Christmas is just around the corner......love this time of the year!
Posted by Karen at 8:17 PM 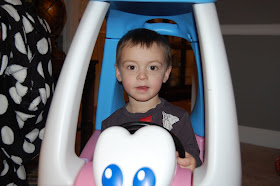 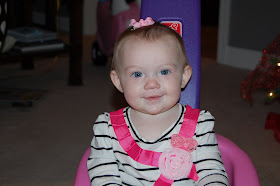